While everyone else was watching John Scott rub it in the NHL’s face in Nashville, the American Hockey League had their own All Star events to tend to.  And for the second straight year, I was able to make the trip…hey, it’s just a 2 hour ride west down the Thruway, you can’t pass that up.  And it was a very interesting and fun time, as a new format was introduced along with the traditional skills (no Jagr impressions or little kids though).

To get things started, Sunday night the All Stars competed in the annual skills competition.

First, the Puck Control Relay…where the East dominated the team competition (Mike Sislo was part of the winning second heat) and split the individual heat (the middle round was won by the West Youth Star selections).

In the Rapid Fire round, the West won out again, stopping 28 shots while the East managed 24 saves.  Yann Danis had 5 of those in his round.

The East would finally get back in the win column during the Hardest Shot round, as Hartford’s Ryan Graves won the individual title with a 103.4 mph shot.  St. John’s Morgan Ellis and Bakersfield’s Brad Hunt were the only other players to break triple digits.

In the Accuracy Shooting round, Chicago’s Pat Cannone took home the individual title with 4 hits in 5 shots.  But the East won team honors after hitting the targets 18 times in 34 attempts.

Both conferences split the Pass and Score competition, as Yann Danis stopped 2 of 3 shots faced during round 3.  Mike Sislo faced off against Ontario’s Peter Budaj in round 6.

The final event was the Breakaway Relay…and it wasn’t the greatest round for Danis, as he allowed 4 of 6 shooters to score.  Sislo did score on Budaj in his round, but the West would dominate 10-5.

And now a few more images from Sunday… 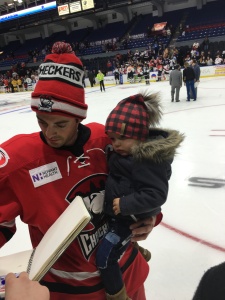 Day 2 Events:
-First on the agenda: the annual State of the League address.  Topics discussed included the imbalanced schedule between the 5 California teams and the rest of the league (still sticking to the plan, but at some point it could get to an even schedule for everyone); the ultimate goal of having 2 referees for every game (due to small pool of referees available it will take time, but the two referee system will be in place for every playoff game come spring); and playoff financing structure for teams (instead of the league receiving a percentage of ticket sales, each team will “purchase” playoff dates from the league, giving them more flexibility for selling and pricing tickets).  Wrong Side of the Red Line has your full wrapup here.
-Now for the games!  A round robin 7 game tournament between all 4 divisions commenced, lasting 9:00 each (except for the final game of 6:00).  Both teams would play 4 on 4 for the first half, then switch sides and play 3 on 3 for the second half.  The final would be all 3 on 3 for 6 minutes, switching sides halfway through.
Game 1: North 1, Pacific 0
In the opening round, it took nearly the entire game before the first goal was scored…then Toronto’s Josh Leivo would score with just 27 seconds remaining to clinch it for the North.  Yann Danis and Syracuse’s Kristers Gudlevskis would split the shutout, with Danis picking up the win.  He only needed to stop 3 shots in 4:30, while Gudlevskis stopped 4 shots.  Morgan Ellis (St. John’s) picked up the lone assist.  Mike Sislo managed one shot on goal.
Game 2: Central 2, Atlantic 1 (SO)
The second game was another defensive battle that saw some late dramatics.  Chicago’s Pat Cannone would put Central on the board with 3:30 left to go.  Then just as time was about to expire, Hershey’s Chris Bourque would get one past Michael Leighton (Rockford) to tie it up, sending it to the shootout.  Leighton would stop all three Atlantic shooters, while Portland’s Mike McKenna would give up one to Cannone, giving the Central the win.  Leighton went the distance and stopped 4 of 5 shots before the shootout.  2 skaters on each side would have assists.
Game 3: Central 4, North 2
The offense finally started picking up as the Central and North each played their second game.  Yann Danis would draw the start and struggled a bit, giving up two goals in 4:30.  Pat Cannone would score his second of the day 1:41 in, followed by Jake Dowell (Rockford) 36 seconds later.  Dowell would strike again against Kristers Gudlevskis 5:03 in for a commanding 3-0 lead.  But the North would get on the board with two goals in 31 seconds…Josh Leivo would score his second of the day, followed by Michael McCarron (St. John’s) to cut the lead to 3-2.  But an empty netter by Ryan Hartman (Rockford) would clinch a second win for the Central.  Manitoba’s Eric Comrie would go the distance in picking up the win, stopping 11 of 13 North shots.
Game 4: Atlantic 2, Pacific 1
In another defensive battle, the Atlantic scored twice in the first 2:32 and never looked back.  Bridgeport’s Alan Quine, a last minute replacement, would score on Bakersfield’s Laurent Brossoit 54 seconds into the contest.  Seth Griffith (Providence) would double the lead with his first of the night.  Sean Backman (Pacific) would break up the combined shutout bid with 1:30 left, but no more.  Mike McKenna picked up the win with 3 saves, while Anthony Stolarz (Lehigh Valley) would follow up with 7 saves on 8 shots.  Four different Atlantic skaters would add helpers.
Game 5: Pacific 6, Central 4
Finally, some offense!  And it only took 12 seconds and a Derek Grant (Stockton) goal to get things started.  Xavier Ouellet (Grand Rapids) and Nick Ritchie (San Diego) would trade goals 25 seconds apart for a 2-1 Pacific lead, then Mikko Rantanen (San Antonio) would extend the Pacific lead to 3-1.  But just as the teams switched over to 3 on 3, the Central would rally.  West Captain Jeff Hoggan (Grand Rapids) would cut the lead to 3-2, only to have Ritchie score his second 4o seconds later for a 4-2 Pacific advantage.  Then Andre Benoit (Chicago) and Jake Dowell would score 2 minutes apart to tie the game up at 4.  But with 4 seconds left, Grant would score his second and Brandon Montour (San Diego) would add an empty netter three seconds later to give the Pacific the win.  T.J. Tynan (Lake Erie) would have two assists for the Central, while three Pacific skaters had two helpers each.
Game 6: Atlantic 4, North 1
An intradivisional battle to determine who was going to face the Central in the final round.  Rob Schremp (Portland) would start the scoring 2:02 in against Yann Danis.  After both sides switched to 3 on 3 play, Chris Bourque would pick up his second goal of the day for a 2-0 lead.  The North would get on the board 25 seconds later thanks to a Mike Sislo goal, but that was as close as they would get.  Alan Quine would score his second of the day for a 3-1 lead, then Schremp would score an empty netter to seal the Atlantic win.  Danis stopped 3 of 4 shots, wrapping up a solid evening for him in net.
Game 7: Central 4, Atlantic 0
The final battle for division supremacy in the AHL…and it was absolutely no contest.  Jeff Hoggan would score 24 seconds in and the rout was on from there.  Derek Ryan (Charlotte) and Pat Cannone would score 38 seconds apart for a 3-0 lead, then Xavier Ouellet would seal the title with an empty netter with 16 seconds remaining.  Michael Leighton would go the distance and stop all 9 Atlantic shots.  Frederick Gaudreau (Milwaukee) would pick up 3 assists.
Although there were quite a few candidates for the night’s Most Valuable Player, Cannone would take home the honors.
Thank you to the AHL, the Crunch, and everyone involved for a fun 2 days!  It’s always a great time to meet up with friends from around the league and interact with mascots I never get to see (I’m looking at you, Western Conference).
And now some photos from Day 2: 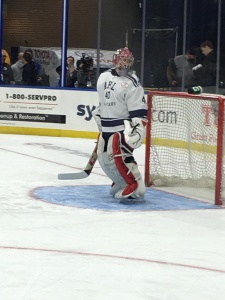 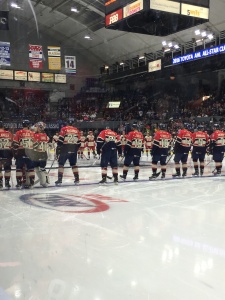 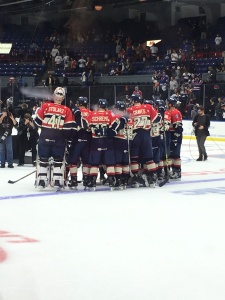